These are the books that have been suggested.  Voting Members will be given an opportunity to vote on the books through the Ocala Book Club - Voting Member's Facebook page.  If you're not currently a voting member and would like to be, visit Ocala Book Club's Facebook page and let us know.  We ask that all voting members be active and not miss more than 2 consecutive meetings.

How it works: Books are chosen by a majority vote made by the voting members. The book will move forward if 51% or more vote to read the book.

Check back often as books will continuously be added to the list as new suggestions come in.  Also, we frequently discuss upcoming books on our Facebook page.

Some books will have special notes - this means they fall outside our usual parameters of general fiction, less than 400 pages.

What Happens in Paradise
​By Elin Hidlebrand

Synopsis:
A year ago, Irene Steele had the shock of her life: her loving husband, father to their grown sons and successful businessman, was killed in a helicopter crash. But that wasn't Irene's only shattering news: he'd also been leading a double life on the island of St. John, where another woman loved him, too.

Now Irene and her sons are back on St. John, determined to learn the truth about the mysterious life -- and death -- of a man they thought they knew. Along the way, they're about to learn some surprising truths about their own lives, and their futures.

Synopsis:
It begins with a phone call. It ends with a missing child.

On a warm summer’s morning, thirteen-year-old school girl Constance Lawson is reported missing.  A few days later, Constance’s uncle, Karl Lawson, suddenly finds himself swept up in a media frenzy created by journalist Amanda Bowe implying that he is the prime suspect.

Six years later …
Karl’s life is in ruins. His marriage is over, his family destroyed. But the woman who took everything away from him is thriving. With a successful career, husband and a gorgeous baby boy, Amanda’s world is complete. Until the day she receives a phone call and in a heartbeat, she is plunged into every mother’s worst nightmare.

The Light of the Fireflies
​By Paul Pen

Synopsis:
For his whole life, the boy has lived underground, in a basement with his parents, grandmother, sister, and brother. Before he was born, his family was disfigured by a fire. His sister wears a white mask to cover her burns.
He spends his hours with his cactus, reading his book on insects, or touching the one ray of sunlight that filters in through a crack in the ceiling. Ever since his sister had a baby, everyone’s been acting very strangely. The boy begins to wonder why they never say who the father is, about what happened before his own birth, about why they’re shut away.
A few days ago, some fireflies arrived in the basement. His grandma said, There’s no creature more amazing than one that can make its own light. That light makes the boy want to escape, to know the outside world. Problem is, all the doors are locked. And he doesn’t know how to get out… 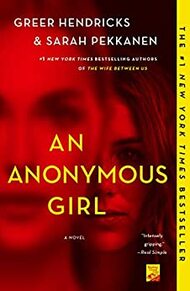 An Anonymous Girl
​By Greer Hendricks

​Synopsis:
​Looking to earn some easy cash, Jessica Farris agrees to be a test subject in a psychological study about ethics and morality. But as the study moves from the exam room to the real world, the line between what is real and what is one of Dr. Shields’s experiments blurs.
Dr. Shields seems to know what Jess is thinking… and what she’s hiding.
Jessica’s behavior will not only be monitored, but manipulated.
Caught in a web of attraction, deceit and jealousy, Jess quickly learns that some obsessions can be deadly.
From the authors of the blockbuster bestseller The Wife Between Us, Greer Hendricks and Sarah Pekkanen, An Anonymous Girl will keep you riveted through the last shocking twist.

Synopsis:
​Years ago, Nora Bridge walked out on her marriage and left her daughters behind. She has since become a famous radio talk-show host and newspaper columnist beloved for her moral advice. Her youngest daughter, Ruby, is a struggling comedienne who uses her famous mother as fuel for her bitter, cynical humor. When the tabloids unearth a scandalous secret from Nora's past, their estrangement suddenly becomes dramatic: Nora is injured in an accident and a glossy magazine offers Ruby a fortune to write a tell-all about her mother. Under false pretenses, Ruby returns home to take care of the woman she hasn't spoken to for almost a decade.

Nora insists they retreat to Summer Island in the San Juans, to the lovely old house on the water where Ruby grew up, a place filled with childhood memories of love and joy and belonging. There Ruby is also reunited with her first love and his brother. Once, the three of them had been best friends, inseparable. Until the summer that Nora had left and everyone's hearts had been broken. . . .

What began as an expose evolves, as Ruby writes, into an exploration of her family's past. Nora is not the woman Ruby has hated all these years. Witty, wise, and vulnerable, she is desperate to reconcile with her daughter. As the magazine deadline draws near and Ruby finishes what has begun to seem to her an act of brutal betrayal, she is forced to grow up and at last to look at her mother--and herself--through the eyes of a woman. And she must, finally, allow herself to love. 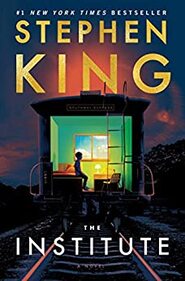 The Institute
​By Stephen King

Synopsis:
​In the middle of the night, in a house on a quiet street in suburban Minneapolis, intruders silently murder Luke Ellis’s parents and load him into a black SUV. The operation takes less than two minutes. Luke will wake up at The Institute, in a room that looks just like his own, except there’s no window. And outside his door are other doors, behind which are other kids with special talents—telekinesis and telepathy—who got to this place the same way Luke did: Kalisha, Nick, George, Iris, and ten-year-old Avery Dixon. They are all in Front Half. Others, Luke learns, graduated to Back Half, “like the roach motel,” Kalisha says. “You check in, but you don’t check out.”

In this most sinister of institutions, the director, Mrs. Sigsby, and her staff are ruthlessly dedicated to extracting from these children the force of their extranormal gifts. There are no scruples here. If you go along, you get tokens for the vending machines. If you don’t, punishment is brutal. As each new victim disappears to Back Half, Luke becomes more and more desperate to get out and get help. But no one has ever escaped from the Institute.

As psychically terrifying as Firestarter, and with the spectacular kid power of It, The Institute is Stephen King’s gut-wrenchingly dramatic story of good vs. evil in a world where the good guys don’t always win.

The Book of Essie
​By Meghan Maclean Weir

Synopsis:
​A captivating novel of family, fame, and religion that tells the story of the seventeen-year-old daughter of an evangelical preacher, star of the family's hit reality show, and the secret pregnancy that threatens to blow their entire world apart.

Esther Ann Hicks--Essie--is the youngest child on Six for Hicks, a reality television phenomenon. She's grown up in the spotlight, both idolized and despised for her family's fire-and-brimstone brand of faith. When Essie's mother, Celia, discovers that Essie is pregnant, she arranges an emergency meeting with the show's producers: Do they sneak Essie out of the country for an abortion? Do they pass the child off as Celia's? Or do they try to arrange a marriage--and a ratings-blockbuster wedding? Meanwhile, Essie is quietly pairing herself up with Roarke Richards, a senior at her school with a secret of his own to protect. As the newly formed couple attempt to sell their fabricated love story to the media--through exclusive interviews with an infamously conservative reporter named Liberty Bell--Essie finds she has questions of her own: What was the real reason for her older sister leaving home? Who can she trust with the truth about her family? And how much is she willing to sacrifice to win her own freedom?